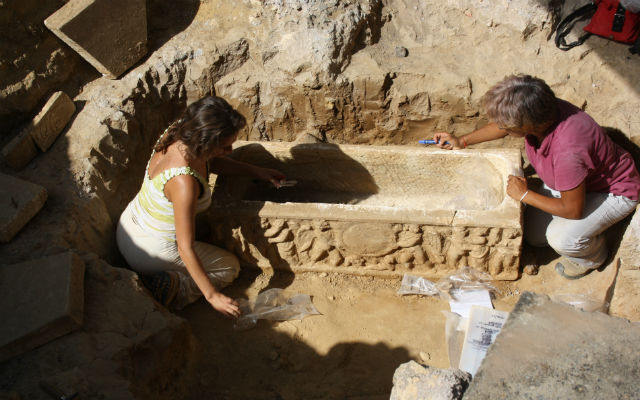 The Olympic Stadium, home of rival football outfits Roma and Lazio, has always been a cemetery of dreams for both clubs. Now archeologists have found two ancient Roman sarcophagi, burial grounds, just behind one of the iconic stadium’s stands.
The discovery was announced by the Special Superintendency for the Colosseum and the Archaeological Area of Central Rome. A government body charged with protecting Rome’s cultural heritage. The organization is part of Italy’s Ministry of Culture, Tourism and Heritage.
“The sarcophagi would seem to be the burial places of two children of wealthy Roman families”. Said Rome’s cultural authority.
One of the sarcophagi was “decorated with a rich bas-relief”. While the other bears “simpler” yet also “impressive” motifs, according to the archeological body.
The stone tombs were found during a routine archeological dig “just behind the Curva Nord”, the part of the stadium used by Lazio supporters in home games.
So the findings have been taken to the superintendency’s labs to be restored and the results of studies will be released in the next few months, adds the statement.
Such discoveries are not uncommon in Rome. A carbonized solarium was found during excavations to extend a metro line in July this year. Baths and tombs were also unearthed last summer.

Not only Ancient Roman tombs, but Mini Pompeii found in Rome: