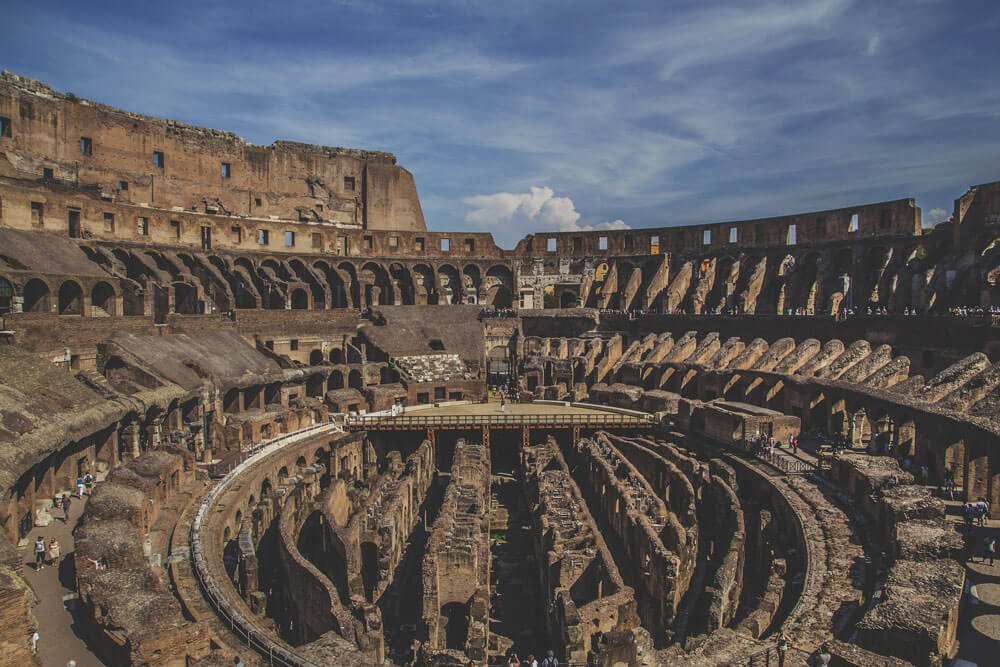 It is famed as the place where gladiators battled lions to the amusement of the citizens of ancient Rome. But of the six million visitors who flock to the Colosseum each year, how many know that during mediaeval times, it was also the fortress base of a powerful Roman family for over two centuries?

Or that in the 1600s, it was like a botanical garden? Its state of semi-abandon, combined with a micro-climate, enabled more than 400 species of plants to flourish inside its arched walls.

Now, thanks to some archaeological detective work based on discoveries made during a spruce-up, a new exhibition recounts some of the untold stories of one of the world’s most-visited monuments.

“The Colosseum: An icon,” which opened on a middle floor of the amphitheatre and runs until next January, shows that life inside the iconic structure did not end with the disintegration of the empire or the final show of the classical era, in 523 AD.

“What it shows is the extraordinary capacity the Colosseum has had to assume different identities over the centuries,” said Francesco Prosperetti,one of the officials in charge of the jewel in the crown of Italian tourism.

Scholars had long been aware that the mediaeval-era Colosseum had a fortress owned by the Frangipane family.

But much of the archaeological evidence of it was lost at the time of 19th-century excavations, when masonry was removed for new buildings or restorations elsewhere in the city.

Recent restoration work on upper sections of the partially-intact structure however uncovered traces of what was a raised wooden walkway which served as a lookout for the Frangipanes’ soldiers, constantly wary of attacks by rival families.

That has enabled historical experts to put together model and pictorial representations of what the mediaeval Colosseum would have looked like, and these are among the highlights of the new exhibition.

Other archaeological finds, including one side of a ram’s head and carved antlers, point to the mediaeval Colosseum being a hive of activity with the fortified aristocratic residence serviced by a range of businesses, market gardens and religious institutions.

Learn more about the Colosseum and what life was like in Ancient Rome, in our Lives of the Romans Tour.

The wooden fortress was partially destroyed by a 1349 earthquake but its surviving structures were later incorporated into a hospital sponsored by wealthy families whose seals have been recently found in digs on the site.

The collection also explores how the building came to be a reference point for students of architecture from far afield and, following its later fall into an elegant state of semi-abandon, how it inspired Renaissance painters and romantic poets.

Completed in 80 AD, the Colosseum was the biggest amphitheatre built during the Roman empire.

Standing 48.5 metres (159 feet) high, it was capable of hosting 80,000 spectators for feasts of entertainment that encapsulated the brutality, hedonism and engineering genius that were among the defining features of ancient Rome.

The first phase of a major makeover of the venue was completed in July 2016 with a number of sections structurally strengthened and most of the remaining walls water-sprayed to remove centuries of encrusted dirt and grime.

The works were largely financed – to a reported tune of 25 million euros ($26.5 million) – by upmarket shoe and fashion company Tod’s.

The government has pledged to put up the cash for a second phase which will involve rebuilding the arena floor and make the venue capable of hosting concerts and other cultural events, including re-enactment of some Roman-era events.

The culture ministry has also advertised for a new supremo to oversee the Colosseum as part of a broader shake-up of the management of the country’s landmark historic and cultural attractions.

Seven of Italy’s most enchanting Christmas markets in 2022